Skip to content
Home »HOT Topics »YOU CAN SPEAK TO GOD

One day, as I was meditating on the power of speaking in tongues- the Lord showed me a busy foreign marketplace. Where everyone was bustling around, like a busy mob -shoulder to shoulder- all speaking a foreign language, various different words- all at the same time. Not a tranquil Sunday afternoon marketplace in which you would meander dreamily, but a sweaty Monday marketplace filled with a cacophony of various motions and foreign dialect. In the vision, a father and son- both English speaking, had been separated- and the father was looking, with out-stretched neck- for the son.

Oddly enough, the father was not shouting- he was listening. It was the son who was doing the shouting, saying; “Father! Father! Here I am!” Even though the boys voice, was fainter than the rest of the indecipherable jargon- the father found him, immediately! Not because he was screaming louder than the rest- but because the boy was speaking English in a crowd of foreign speaking people! The father and son couldn’t see each other- but when the son shouted out to his father, in a language his father could understand- the father immediately found the son, and they were reunited. 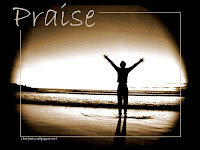 “ And because ye are sons, God hath sent forth the Spirit of his Son into your hearts, crying, Abba, Father.” Gal. 4:6 (KJV) The Message Version says, “You can tell for sure that you are now fully adopted as His own children because God sent the Spirit of His Son into our lives crying out, “Papa! Father!” Doesn’t that privilege of intimate conversation with God make it plain that you are not a slave, but a child? And if you are a child, you’re also an heir, with complete access to the inheritance.”

How wonderful is that! The Spirit of Jesus- His very Spirit is living in us crying “Abba, Father!” Before the vision from the Lord, I had always read this scripture to mean that we are left to cry out to Him, and go find Him (like it was in our power)- but instead, it is Jesus’ Spirit in us crying out to the Father God, on our behalf! We became God’s very own child when we accepted His Son, and now we through Christ- speak His language! Thank God it’s not up to me to figure out how to get to Him, I’d only get myself more lost!

When we are in an intimate relationship with someone, like the little boy in the marketplace- we speak the same language. And though the boy was shouting, “Father! Father!” What he was really saying was “My trusted companion! My provider! My only security! Where are you?!” When we shout out to our Father, in time of need, or hopefully otherwise- we praise Him! And He hears our praise!

“But thou art holy, O thou that inhabitest the praises of Israel.” (Psalm 22:3) When we praise God- He comes to us! Unlike other religions full of ‘trying to get a more heightened sense of spirituality’, when we praise our God- He comes and finds us! How freeing is that? You will never be lost, abandoned, left alone again! And once you are reconnected, and hooked up to the source of His provision- He is more than capable to set you straight again, because He not only loves you and wants to find you, He created you!

“What I’m trying to do here is to get you to relax, to not be so preoccupied with getting, so you can respond to God’s giving. People who don’t know God and the way he works fuss over these things, but you know both God and how he works. Steep your life in God-reality, God-initiative, God-provisions. Don’t worry about missing out. You’ll find all your everyday human concerns will be met.” Matthew 6:33 (The Message)

As a community we welcome your comments and replies!